The Online Citizen
No Result
View All Result

Is Chia Shi Lu’s alleged walkabout just the tip of a greater and concerted effort by PAP MPs to do the same?

Member of Parliament (MP) of Tanjong Pagar Group Representative Constituency (GRC), Dr Chia Shi Lu has come under fire for conducting a “walkabout” at the Alexander Food Centre on Sunday 12 April amid the Corona virus outbreak which appears to be in contravention of his government’s own “circuit breaker” measures of staying home.

The outpour of criticism from the public on Chia’s “walkabout”, caused People’s Action Party (PAP) to finally announce a day later that it is suspending ground engagement with residents till further notice.

Chia has defended his actions by intimating that his public appearances were not “walkabouts” but rather, an effort to tell people to wear their masks.

However, do you really need to go out with an entourage just to tell people to wear masks?

Surely, social media, news reports, television messages, letters in the post etc will be enough?  Would it not set a much better example to stay at home in these perilous times? It doesn’t seem to add up.

If Chia had indeed gone out with the sole intention to tell his constituents to wear masks, it doesn’t seem like a very appropriate action to take at these times when we should really be limiting our outings to strictly necessary ones. If so, his judgment (or lack thereof) in this matter, is questionable.

And if Chia had indeed gone out with the intention to meet and greet ahead of allegedly imminent general elections, it would yet again be an action that is possibly selfish and in contravention of government guidelines to stay at home.

Giving him the benefit of the doubt, perhaps he was just overly enthusiastic and made a mistake. If so, why not just admit it and apologise instead of coming up with an excuse that sounds somewhat ludicrous?

Not to mention reporters were on scene to report on his visit to the hawker centre. How did the reporters know that he would be there at that specific time if they were not informed?

Besides, how does his excuse stack up with the Facebook (FB) posts of other MPs who have also been out and about in a similar time period?

Senior Minister of State in the Ministry of Health and Ministry of the Environment and Water Resources, Amy Khor posted that she visited Tiong Bahru Market on 11 April apparently to see how the stallholders were doing while on the same day MP for Marine Parade GRC, Seah Kian Peng posted on his FB page that he walked around “the estate to visit places that were opened to check on situation (adherence to the elevated sage distancing measures)….”

Many more PAP MPs have also made similar posts of their visits in the same time period.

Looking at the timing of these FB posts, there is there a coincidence in the timing? And, if so, is this the right time to be undertaking public relations exercises when the government has put in measures to limit social contact?

Besides, why is there a need for MPs to check that measures are observed? Aren’t the police and other enforcement officers already doing that?

This whole boo boo highlights a few potentially disturbing observations. If Chia was indeed going out on a campaign trail, he has put the lives of his volunteers and his constituents in danger. He would also be unwittingly or otherwise, sending out the message that different rules apply to different people. I.e. those in power can go out while plebs get fines and the like for going out.

His excuse (if it was) would also be an insult to intelligence which brings to fore his possible disdain for mere mortals such as us. If indeed, he truly was going out on a mask wearing exercise, then he clearly suffered a lapse in judgement and should apologise anyway.

Worse still, if this is a concerted effort by PAP MPs to walk the ground and gain traction at a time of great tension, then it is opportunistic of the ruling party and reprehensible for double standards being practiced.

While the people generally take no pleasure in criticising the ruling party , the poor performance of the government, coupled with the bad and rules- non-compliant behaviours of some PAP members, have put the PAP to be the epicentre for ridicule, criticism and reproach .

The people are finding it increasing more difficult, by the passing of each day, not to criticise the government, than to criticise .

Bad leader sets a very BAD example for all….. You tell people stay home, why you come out to show people???

Are they flouting the CB rules???? So, how to follow them and support them???

All dear Singaporeans, please wake up and vote wisely in next GE Thanks…

Chia and Amy offered up “pappied styled” bs as always. No challenges from a proper press, which SG no got, or interviews, so yes, … gotten away with it, … ”pappie style” !!!

They just didn’t expect the backlash, and more would’ve followed if not for it. They thought they were much loved, and the public would be, … “mei ser, mei ser” !!! 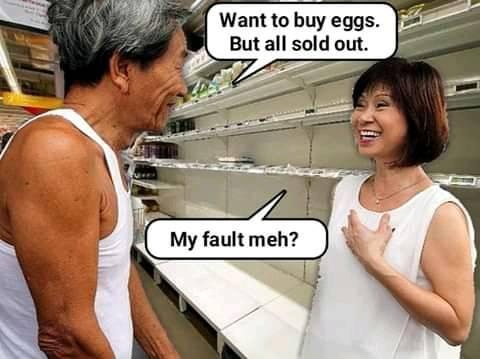 u d 69% hab brains..or r u all usin duracell bateree..& yes d free bonuse$ wud die out fast…besai u pae back in quadruple$

0
0
Reply
No Result
View All Result
Support us on PatreonBecome a Patron! Or subscribe to us on this website

No Result
View All Result

© 2020 All rights reserved under The Online Citizen Pte Ltd